When Christianity emerged there were a lot of tensions in the Roman Empire. In previous posts (here, here, and here), I go into detail about Christianity’s development from Greek, Jewish, and other influences so I won’t repeat myself. (It amuses me no end that some people perceive Christianity to have suddenly sprung from nowhere; it’s like thinking flowers naturally appear in vases without consideration given to the environment in which they were grown.) Perhaps, the main point to keep in mind when examining Early Christianity is that its followers did not follow the Gospel stories like most churches do today. Early Christian’s did not have any writings that they followed simply because they wrote the New Testament (see below for timeline). Either that, or they were illiterate. How then did people learn? Answer = stories. Verbal stories. 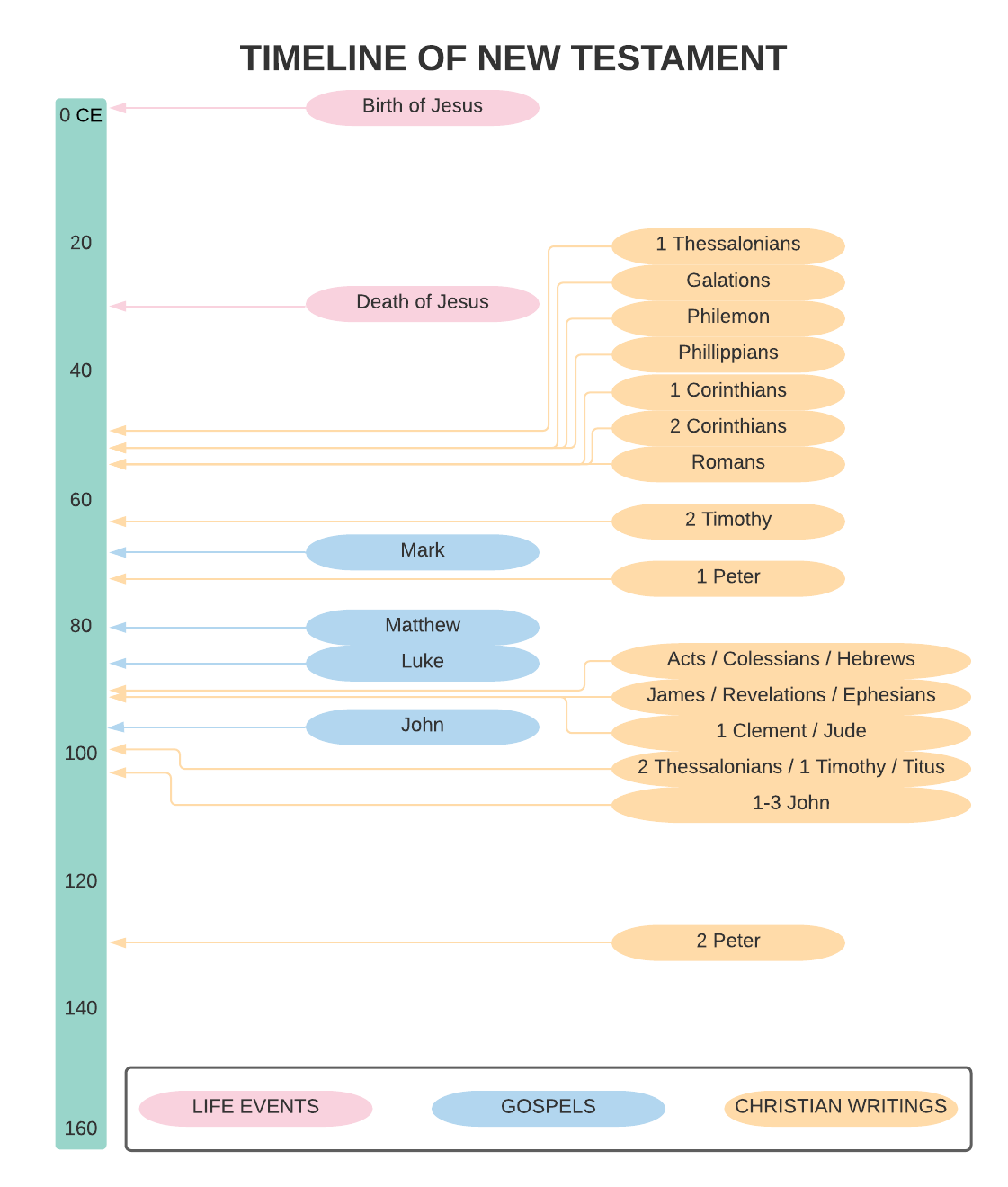 Timeline of when New Testament writings were created

Now, the next factor to consider, how does one remember stories they want to pass on to others when they cannot read and write? There are several methods one can use, many of which can be described as mnemonic devices. For instance, Australian Aborigines used features of the landscape as cues. Storytelling could literally be a journey in which one wandered around, with landmarks like old trees, mountains, rivers, and so forth being reminders of what was to come next in the tale. When the English colonised and destroyed the landscape, many stories were lost because the First Nation people did not have their “book” anymore.

Back to the cradle of western civilisation in Europe, it can be hypothesised that prior to the invention of writing, people used the heavens as a mnemonic device for recording stories. Unlike the earth’s features, references in the sky are less likely to be destroyed, hence, the stories could be told and retold for hundreds of years. If correct, it provides a logical premise to explain why so many cultures referred to the Sun as creator and the planet and stars as its offspring (see The Big Bang Theory in Egyptian Mythology). There is a rich and dense supply of ancient stories that incorporated both astrological and human characters, e.g., Jupiter is a planet and a God, Venus is a planet and a Goddess, etc. Modern theories of astrology do not accurately capture past beliefs.

Symbols are complex, with layers of references that require consideration (see The Connection between Symbolism and Mental Wellbeing:The Basics ). For example, at the iconic level, a symbol of the Sun means the Sun. At an indexical level, the Sun is a reference to light and warmth. At a symbolic level, the Sun represents a life sustaining object. Using one’s imagination, a Sun could also be a God, or the Son of God, or something else that somehow relates to its iconic and indexical references. To learn what the Sun symbol means, one needs an education. Like trying to interpret Durer, simply looking at symbols does not give all the answers.

In antiquity, the revealing of hidden meanings of symbols took place progressively, in stages of initiation that can be likened to modern education in which children first learn through being told stories, then progress to learning letters, words, sentences, and eventually they can write their own stories. The stories children hear inform and mould their communication style that is carried into adulthood (like an artists building templates that they can reuse again and again; Banksy uses this process in his/her art making). Logically, the more diverse stories a child hears, the more possibilities for interpreting symbolism they will develop (like an artist who is skilled across multiple mediums). However, it is also plausible that a child will fall back on what is most familiar to them, that is, the symbolic language which is used the most frequently in their homes and society. For example, Eastern cultures untouched by WW2 may learn about Nazi association with the Swastika but they are unlikely accept the negative connotations of the symbol on a personal level.

Early Christians were like preteens in later primary school. Collectively, they drew upon symbols that were used by the cultures around them to tell a new story. The story of Jesus Christ in the four canonised Gospels share a lot of the same symbols, however, subtle differences between them can be identified as being congruent with the culture they came from. For example, Matthew’s Gospel was written in Hebrew, whereas Mark, Luke, and John were written in Greek. The different language means Matthew came from slightly different culture (even though all apostles were living in The Roman Empire) and, in turn, the audience he was addressing valued different symbols, hence, the inclusion of the star of Bethlehem, the wise men, and the phrase “kingdom of God” instead of “kingdom of heaven”. All these features tap into Jewish culture in a manner that the Greek versions don’t.

It is also worthy to consider that when the Gospel stories were being repeated by word of mouth, the storytelling would have been slightly different each time. The written product is the result of a perfected version that relayed the most important parts of the Jesus Christ narrative.

Additionally, Early Christians also made artworks that reflected their cultural backgrounds. For example, paintings on the ceiling of Early Christian catacombs followed the design principles of Jewish catacombs:

Early Christians depicted Jesus with a wand to represent his magical powers. This symbolism could be a link to Moses’ staff (that he raised to magically part waters) or it could be linked to Greek accounts of Hermes and Athena who both waved wands to perform magic. Either way, the depiction of Jesus with a wand presented an easy to read symbol to people living in the first century.

Early Christian depiction of Jesus performing magic with a wand

It’s widely recognised that Early Christians pictured Jesus as a young man, cleanly shaven, with a likeness to the Greek God Apollo.

Early Christian relief carving: Jesus is repeated in all the figures holding a wand.

First and foremost, the first Christians taught each other about Christian faith through verbal storytelling, then through Art, and then writing. The indoctrination process into Christianity was presumably like other modes of education, that is, a person progressively learned what the symbols were and then moved onto more complex or finer points of their meanings – these steps could be taught in a myriad of ways that were either implicit or explicit, and included medications, prayers, rituals, creating pictures in sand, discussions, etc.

To explore how symbols may have been gradually introduced in Early Christianity, let’s look at an anchor. Like many symbols, it’s meaning could be discovered in layers. 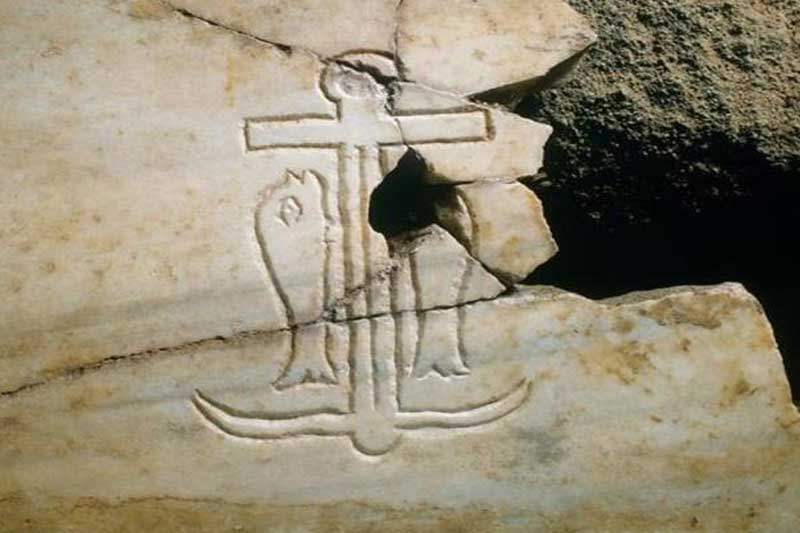 Anchor in the the Catacomb of Priscilla, Rome, 2nd Century

On a simple level, an anchor suggests being secured to a location, like a boat whose anchor is tied to the shore. This metaphor could then be used to infer a Christian needs to “anchor” themselves to Jesus Christ, especially when the seas of life are rough and windy. This interpretation is supported by Hebrews 6:19-20 (below) in which “anchor” is specifically referred to as being “hope”:

This hope we have as an anchor of the soul, both sure and steadfast, and which enters the Presence behind the veil, where the forerunner has entered for us, even Jesus, having become High Priest forever according to the order of Melchizedek.

By using symbols to describe spiritual concepts, their meaning moves from being purely intellectual, like simply telling someone they need to have hope in Jesus, to evoking emotional responses – an anchor brings to mind visceral associations of water, boats, and security, which add depth to the concept of “hope”.

On another level, hidden within the symbolic representation of christian anchors is the suggestion of a cross, thus, hope is juxtaposed with Jesus’ crucifixion.

As per the above two examples of anchors from Christian catacombs, fish were also frequently included. These could be a reference to Jesus being described as a fisherman of men (Matthew 4:19), or it could be speculated that they are a reference to the astrological symbol of Pisces, hence, a reference to time, i.e., the Age of Pisces. The bottom line is that symbols can have multiple meanings.

There were many stories and writings of Jesus Christ circulating in the first two centuries of the common era (see except below). This reality, and the finding of additional gospels in Egypt, 1945, referred to as the Nag Hammadi, leads some to speculate that once Early Christians learned the story of Jesus, they were encouraged (or required) to express their understanding in writing that incorporated learned symbology. (For more details about this theory, see Youtube: Is This Proof That Jesus Christ Never Existed?).

Early Christianity was not a universal system. Two broad groups emerged: those who interpreted Christian symbols to be mostly literal and those who interpreted them entirely symbolically. Those who viewed Christian symbols entirely symbolically were often called Gnostics and after Constantine, they were declared heretics and their bibles apocrypha, i.e., non genuine. That’s not to say that what became mainstream Christianity was based solely on iconic or indexical understandings of symbols. Rather, it just means one set of interpretations became mandated and others became outlawed. As the heretic interpretations of Gnosticism were suppressed, their ideas slipped into a hidden realm of knowledge that later reappeared in the Renaissance era as a component of occultism.

One thought on “Exploring Occult Symbolism From a History and Herstory Perspective of Education: Part 5 – Christianity”